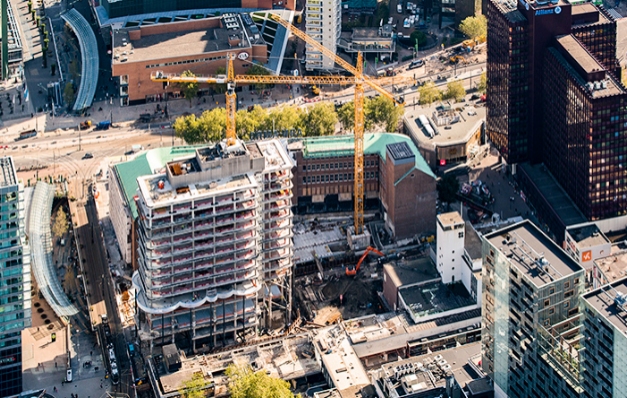 December 2020 - The inner city redevelopment project Forum Rotterdam(with a total area of approximately 65,000 m2) was officially opened on 24 September 2020. Forum Rotterdam was designed by OMA and WDJarchitecten and it is wedged in between the main shopping streets of Rotterdam: Coolsingel, Binnenwegplein, Lijnbaan and Koopgoot. It has a long history.

In 2008, a central location was initially set aside for an almost 70-metre-high, cube-shaped, building with round recesses that the people of Rotterdam christened the 'Koolhaas cheese'. The plan was that this 'super cube' would house shops, offices, homes, a cinema and a hotel. But the project was cancelled and the plans were cut back severely in the years that followed. When construction started in 2017, the emphasis had shifted from a new building to renovation and transformation. Construction took three years, a year longer than planned.

“Forum Rotterdam: a new iconic location in the city centre where people can enjoy shopping, working and living.”

The former ABN Amro building on the Coolsingel street has been completely renovated and restored to its former glory. This iconic national monument is now home to offices and shops. The largest bookshop in the Netherlands is also located here. It occupies two floors, including a mezzanine floor and an atrium at the rear.

Redevelopment of the core shopping area

The shops on the Lijnbaan have been moved to Forum. They have been expanded and given a new façade which has been designed as a transparent screen that preserves the uniform character regardless of any changes in the layout of the shops behind it. Between the national monument on the Coolsingel and Lijnbaan, and from the 'Koopgoot' to the Binnenwegplein, the international fashion chain Primark is now the heart of Forum.

The former office tower from the 1970s in the middle of the area has been preserved. The building has been completely stripped and transformed into a residential complex with round petal-shaped balconies. It has 103 apartments measuring between 85 and 120 m2.

Due to the length and weight of the construction profiles, the material was hot-dip galvanised, in part on Saturdays, at Rotocoat in Heerhugowaard. Rotocoat has the longest galvanising bath in the Netherlands in Heerhugowaard (15,600 mm) and a lifting capacity of up to approximately 15 tonnes. It has the perfect facilities for the hot-dip galvanising of heavy or very heavy steel structures.

To make our website more user-friendly and to tailor it more closely to your preferences, we use cookies and similar techniques.

By clicking on Accept, you give us consent to place social media and marketing cookies. Go to Cookie settings to make your own selection of the cookies that will be placed. You can always adjust your preferences. For more information, read our cookie policy.